I’m near the end of the first full draft of my new novel, The dead can lie. It’s about Greg, a criminologist whose wife was killed by a serial killer known as the Dreamer. A year after her death, Greg has no new leads, and is close to ending it all, when he receives a phone call that changes everything. But he is then framed for his own wife’s murder. 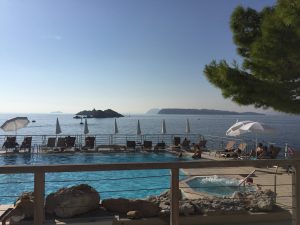 I didn’t intend to write this book, I had something else in mind, but it kind of insisted. I grew up near Broadmoor, a mental hospital for the criminally insane, where certain killers used to be kept. Once a week they used to test the sirens in case one escaped. It happened occasionally, and we would be told to stay indoors until they were re-captured.

Then I studied psychology, fascinated by the mind, how it worked, and how it could go wrong. So I guess this is where the novel is coming from. My fellow writers in Paris seem to like it, though they find it kind of scary.

I have about three chapters left to write,  but two of them are proving a challenge. Not the last one, since I’ve known since the beginning how it will end. But the build up before the final crescendo is a bit tricky. So I had the chance last week to go to a psychology  conference in beautiful Dubrovnik. The conference was for work, and I’d intended to do some writing during the evenings and early mornings (I don’t sleep much), but instead, when not attending some fascinating lectures on aviation and even space psychology, I caught up with friends and colleagues I’ve not seen for a while, and once I discovered there was diving locally, well, that was it.

But now I’m back, and after a much needed break, I can see clearly how to resolve the next chapter. So, back to the grindstone, because Greg’s in serious trouble…